It was sewed and embroidered by expert tailors, called "Terzidhes". The decorative embroidery made with dark blue or black silk twisted strings, called "Hartza", were made and sold by specialist craftsmen, named "Kazazis" or brought by merchants and "Terzidhes" from Egypt.

The striking feature of the costume is the breeches. In Western Crete it was called "kartsa", while on the east "sialvari". The plural form of those terms, “breeches” or "salvaria", prevailed throughout the island, meaning the whole costume.

After the First World War Cretans started using a different type of trousers called “kilota”, that looks like the trousers used by the French cavalry soldiers.

The traditional head cover of the costume was either the red folding fez with a black tassel or the "turban" in the form of large veil known as "skin" «πέτσα». The modern braided black silk kerchief, considered nowadays the traditional Cretan head cover, with dense fringes resembling tears, made his appearance in the second quarter of the 20th century in central Crete. It is said that it has many fringes to show the many years of Ottoman rule in Crete and symbolize with their shape, sadness and grief caused by the holocaust of Arkadi Monastery in 1866.

A special feature of the costume is the silver knife. During the Venetian rule it was called "Bounialo" or "Pounialo". During the Turkish occupation it was called "Passalis." The typical knife in the form preserved until today appeared in the late 18th century. The grip was called "manika" and appeared in a variety of shapes. The most prevalent form was the one that the ending of the handle was fishtail-shaped or otherwise V-shaped. The knives with dark horn handles were called "mavromanika". and formerly "skouromachaira". The blade wretch was called “foukari" and was silver handmade, carved with the chisel. The silver wretch is particularly striking and has high aesthetic value with rich decoration. It was the main male jewel and indicated the social status and economic situation of the Cretan who wore it, characterizing the "kaloseirous" (individuals coming from good families) and was also a sacred and integral part of warriors armors.

In approximately mid 1950s, the gold embroidery appeared on male Cretan costume, when special forces of Cretan breach wearing Palatial Guard was established (called Military House of His Majesty). The design of their costume was based on the traditional costume of the Cretans, in the Cretan Gendarmerie outfit and the costume of “Kavasides”. From the second it borrowed the red waistcoat «γελέκι» and the type of decoration of the jacket «μεϊτάνι». From the third the shade of decoration. White braids of Cretan gendarmes were replaced by the golden ones of “Kavasides” and became what, nowadays, decorate the clothes of Cretan breach wearing guards of the Presidential House. 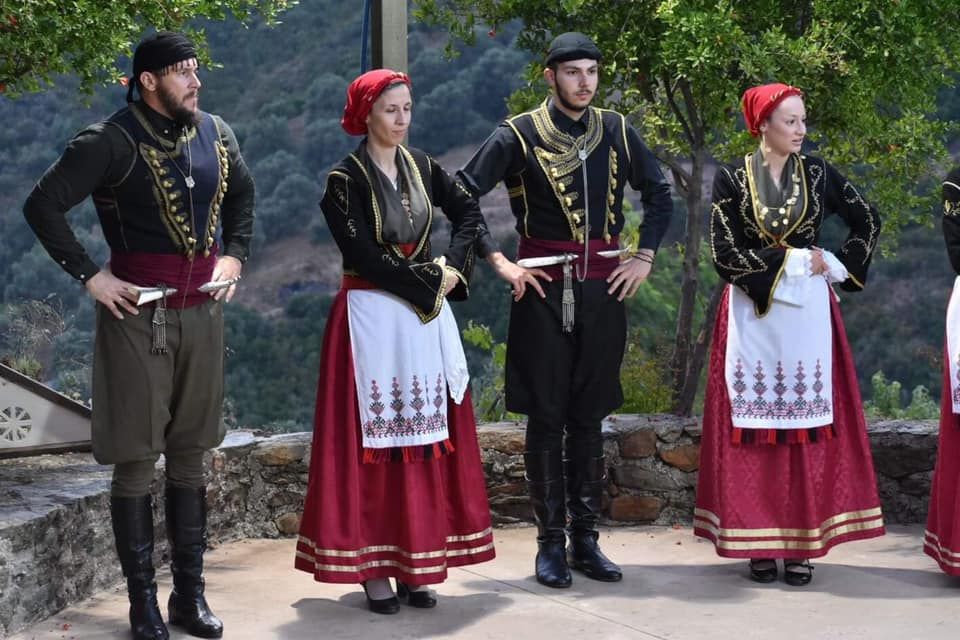