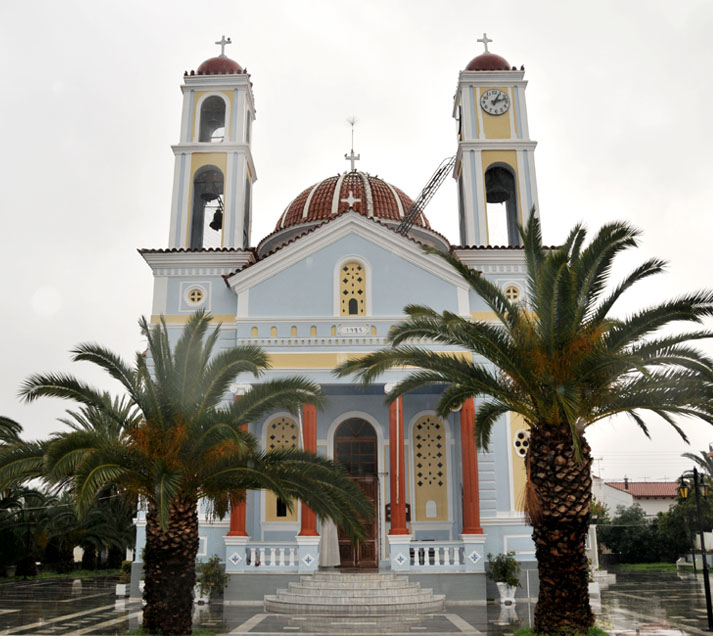 The place name is etymologically derived from the Hesiodic adjective "alikinos", which means strong, fortified, and is related to the strategic importance of the location, which controls access to mountainous Kydonia. Another etymology, equally plausible, is from the newer noun "gravel"> Halikianos> Alikianos, a place full of pebbles, which is related to the fact that in the past a significant part of the plain was barren pebbles, from the pebbles that the river Kairitis spent in the winter. (We note here that a similar place name, in combination with the existence of "gravel", due to an adjacent torrent, is found in the Greek-speaking villages of mountainous Calabria, in Lower Italy (the village "Halikiano").

The existence of Alikianos, with this name, has been known since the years of Venetian rule. During the Venetian occupation, Alikianos was a fief of the Venetian nobles Da Molin, whose tower was located in the center of the village. The ruins of the "tower" of Damolina (as it is called today) were preserved until recently inside "in Kardami the pervoli". Stergios Spanakis saves the information that the tower consisted of three separate buildings, the oldest of which was built by the head of the family, Marco da Molin, who came to Crete from the first years of Venetian rule, in 1229. It was a fortified building. with a tall tower and a jagged bastion at the top, which the people called "vigla" (observatory); an indication that the local environment was hostile. That tower had the coat of arms of Molina, a mill with the Latin inscription "Circumago non flecto" (= I turn, but I do not bend).

At the entrance was the inscription “Omnia mundi fumus et umbra” [1]. The newer buildings were very spacious (the ceremony hall could accommodate 300 guests), with luxurious décor, oil paintings, huge mirrors, a hundred-light chandelier and gilded reliefs on the doors. During the revolution of the Republic of Agios Titos, in 1363, two members of the family, George and Tzanakis, "confessed their homeland, Crete, and broke the faith of the locals," sacrificing their lives near the rebellious Cretans.

The Da Molin family and their tower in Alikianou are linked to the tragic end of the 1527 revolution against the Venetians (or, in 1571, according to other scholars), which Spyr describes. Zampelios in his historical novel "Cretan Weddings". The leader of the revolution was Georgios Kantanoleon or Lisogiorgis, of the Byzantine family of Skordiles, from Christogerako. Cantanoleon (or Cantanoleos, in the modern Greek popular version of the name), along with other Western leaders. Crete, Fotinos, Mousouros, Kontos, Pateros, were fortified in fortresses built in the valley of Ofidosyrma and Meskla, became masters of Kydonia, Selino, Sfakia and much of the plain of Chanoleano, and proclaimed Retouri Ge began collecting taxes on behalf of the revolutionary government. Cantanoleon, taking advantage of the romance between Peter's son and the daughter of the Venetian lord Sophia, suggested to Damolino that they co-opt and jointly promote an honest treaty with the Venetian authority to secure it. coexistence.

Damolin accepted the proposal of the district, but secretly agreed with the Venetian authorities and the central administration in Khandaka, which prepared and promoted in the area a well-equipped army of 2,000 men, with a strong cavalry and leader Gabutio da Colalto. The people of Damolini welcomed Cantanoleos with their aristocracy and their entourage, 350 men and 100 women. wine, in which the Venetians had taken care to put a strong hypnotic. In the early hours of the morning, while all Cretans, men and women, were unconscious, a signal was given to the Venetian army, which attacked and captured the rebels, who did not understand how they were tied up and laughed, thinking that their own people were making fun of them.

In the morning, in front of the court of the Venetians, George Kantanoleon, dressed in a red uniform, proudly replied that he was carrying out his duties as a representative of the previous lords of Crete, the Byzantines. The Venetians immediately hanged him, along with his two sons, in a yard in the courtyard of the tower in Alikianos, while the others - among them the most prominent of the Mousouros, Kontos and Paterus - after being divided into 4 groups, were hanged. in Porta ton Chania, on the way to Rethymno (one every half a mile), in Christogerako and in Meskla. This was the tragic end of the 1527 revolution against the Venetians, which made Cantanoleus a local hero. The relevant information is saved by Ant. Trivan, from which Spyr also draws. Zambelios the material of his historical novel. Newer researchers, Stergios Spanakis and N. Zoudianos, based on sources unknown to older scholars, Gerola and Xanthoudidis, who had challenged the truth of Trivan's narrative, confirm the historical basis of Zambe's novel [4]. It is noteworthy that in Alikianou there is still a family of Damilides - Damilakides (Da Molin = Damilis, with preventive assimilation), while in the village and in the wider area are also preserved the family names Fotini (- Foteinakides), Pateroi (- Konderakides). - Kontoudakis) and Mousouroi (–Mouzourakides)

During the Turkish occupation, the area of ​​Alikianou repeatedly became a field of historical events and the focus of revolutionary action. During the years of the Greek Revolution, the revolutionaries, led by Protopapadakis and Vourdoumbas, occupied the year 1823, and kept the entire Alikianos basin under their control for a sufficient period of time.

During the Revolution of 1866, Mustafa Pasha arrived with a large army in Alikianos, encamped and launched operations against the rebels in mountainous Kydonia. He called on the people of Lakia to surrender and when they refused, he burned the village. In the autumn of the same year, the people of Lakia, Giannaris, Mantakas and Volanis, made a surprise attack on Alikianou, killing 29 Turks and looting their property, avenging the destruction of their village. After the Revolution of 1866, the Turkish commander of Crete, Hussein Aouni Pasha, in order to control the disobedient countryside, built, in the late 1860s, a chain of fortresses throughout the semi-mountainous zone and set up a permanent guard. One of these towers was built on the strategically important hill that dominates the town of Alikianos. From him emerged the place name "Pyrgos" for the area that will later house the Schools of Kydonia and the current Kapsomenos Foundation. According to local tradition, the tower was occupied and demolished by the locals during the "lucky revolution".

In the revolution of 1878, Hatzi Michalis Giannaris set up his headquarters in Alikianou and forced the Turks to retreat. According to information from Georgios D. Kapsomenos, idioms of Hatzis Michalis are preserved in the Historical Archive of Crete, where it is stated that "the Revolutionary Committee met in the Kastelliana district of Alikianos".

In the Revolution of 1897, Timoleon Vassos, the leader of a Greek expeditionary force, landed in the gulf of Kissamos, with the order to occupy Crete, in collaboration with the revolutionaries, and to declare its union with Greece. Vassos installed his headquarters in Alikianos, in the building complex of Metochi Isichakis, which survives to this day, and from there he marched against the Turks of Chania.

During World War II, during the Battle of Crete, the area of ​​Alikianou became the scene of fierce clashes, as men and women from the wider area - mainly the elderly and children, who had not enlisted in the Greek-Italian war - ran to defend their land. against the German paratroopers. In this battle, Emmanuel T. Papaderos, a wounded man of the Albanian front, became a hero of the local resistance, who himself captured an entire parachute unit and shot down two planes, before he fell dead from the German fire. Papaderos, because he was a soldier, was honored by the Germans for his heroic resistance, giving his parents, when they prevailed, a medal of bravery for their dead son. For the resistance of the civilians, however, the conquerors took severe revenge.

On June 2, 1941, they arrested, with a surprise blockade, 48/60 Alikianiotes, mostly elderly people and teenagers, and executed them in the precinct of the church of the Holy Cross. On August 1, 1941, after calling on the people - who had fled to the mountains after the first execution - to return to their homes, they blocked and arrested 118 patriots from Alikianos and the surrounding villages, and after opening them their pits, they were tried by summary proceedings and executed near the bridge over the river Kairitis. At the same time, they burned the village of Skine in retaliation for the resistance of the inhabitants. The children of the area who grew up during the Occupation and in the first post-war period were mostly orphans.

For the struggles and sacrifices of the locals, May 21 was declared by the state, following the actions of George D. Kapsomenos, "as a day of official celebration in Alikianos" (Government Gazette, Sheet 243, Issue A, 5 . 9. 1955). 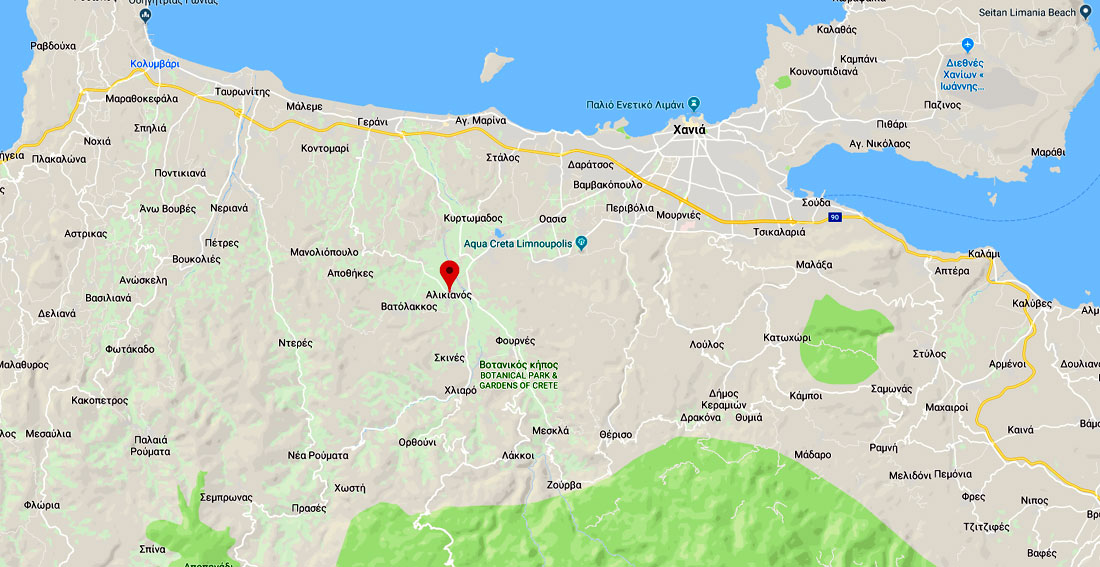